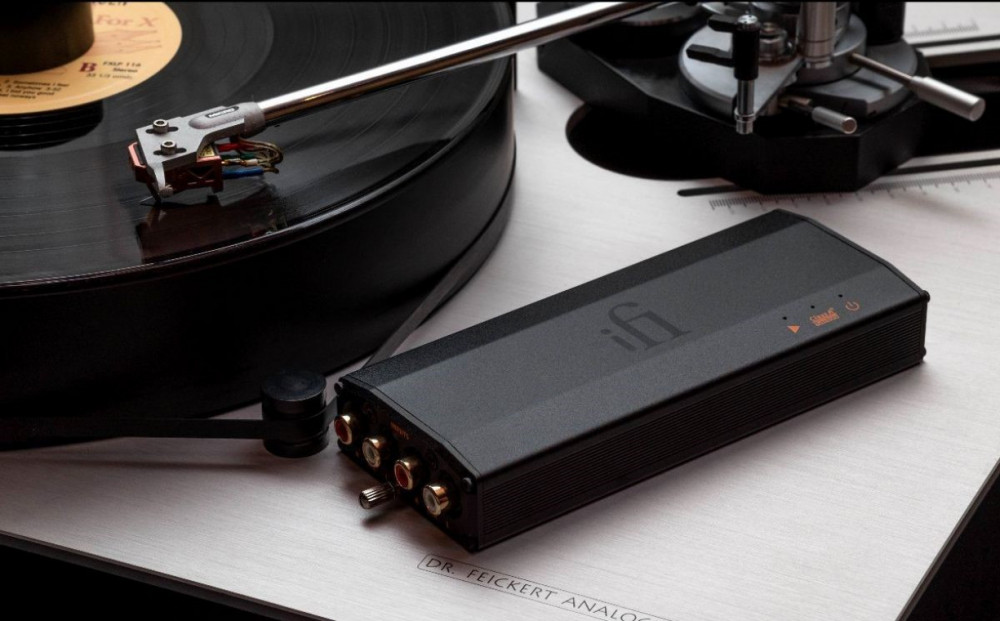 Black Label phono stage is the perfect fix for vinyl addicts, ensuring every record is heard just as the artist intended.

As music lovers across the land return to the tactile virtues of vinyl, so the demand for high-quality turntables has increased. This has raised the need for high-performance phono stages to make the most of the wonderfully natural and engaging sound of which vinyl records are capable.

By necessity, every turntable has to be partnered with a phono stage to amplify the low-level output from the phono cartridge to ‘line level’. Some integrated amps and preamps have phono stages built in, but these vary in quality and are never as good as a well-designed offboard phono stage placed in the signal chain between the turntable and a line-level input on the amp. For serious turntable users, a separate phono stage is a must.

Several years in development and incorporating technology derived from the £12,000 PH-77 phono preamplifier from sister-company AMR, iFi’s new flagship phono stage – the iPhono3 Black Label – has been painstakingly designed to satisfy the most discerning vinyl enthusiast. User-configurable to match any MC/MM cartridge and suit every record, it delivers performance and versatility that place it in a league of its own in the circa £1,000 category, competing with devices at much more rarefied prices. 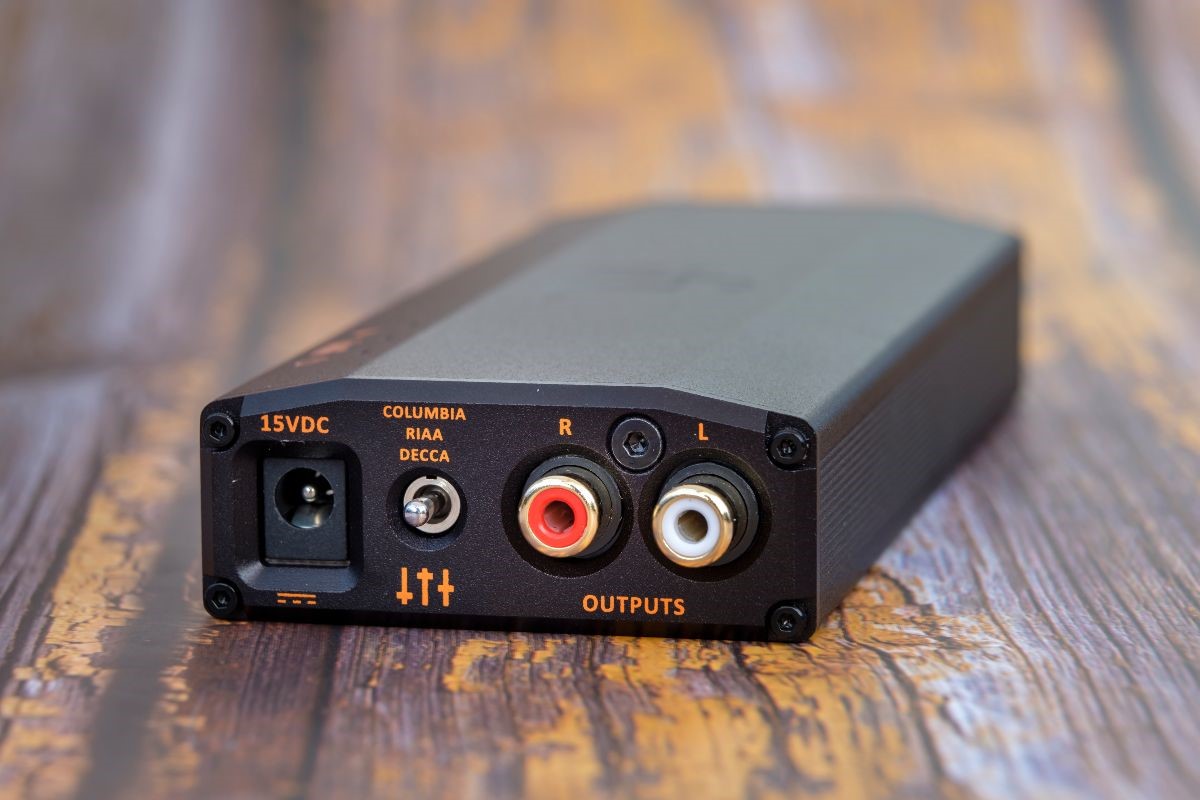 Cable connections are at opposite ends of the slimline chassis – MM/MC inputs at one end, power in and audio out at the other.

Unlike a typical phono stage, the iPhono3 Black Label’s circuit is direct-coupled – that is to say, there is no coupling capacitor from cartridge to output. This is achieved without a conventional DC servo; iFi calls this design Direct Drive Servoless, incorporating a proprietary DC Infinity circuit to boosts DC gain to a level approaching infinity.

Once the feedback loop is closed, the DC gain cancels all offset voltages to deliver a direct-coupled output with 0V DC offset. The key to the DC Infinity circuit is that it only changes the gain below approximately 0.01Hz, while leaving the AC behaviour of the circuit at higher frequencies unchanged, injecting neither noise nor distortion into the audio signal. This contributes greatly to the iPhono3 Black Label’s audible clarity, accuracy and transparency.

In the world of high-end audio, some folk advocate solid-state signal amplification while others swear by the sound of valves (or ‘tubes’ for those from the other side of the pond). Both have their inherent advantages – among them, solid-state circuits typically offer lower distortion and high durability, while valves deliver fluid, grain-free sound with natural tonality.

The TubeState engine delivers a sound of exceptional poise – crystalline clarity without a hint of edginess; free-breathing dynamics; engaging pace and timing; and a soundstage brimming with texture and fine detail. From
the moment the needle hits the record, everything sounds crisp and clear, yet no single element within the musical whole is over-emphasised – you hear the music, cohesive and in its entirety, as it was intended to be heard. 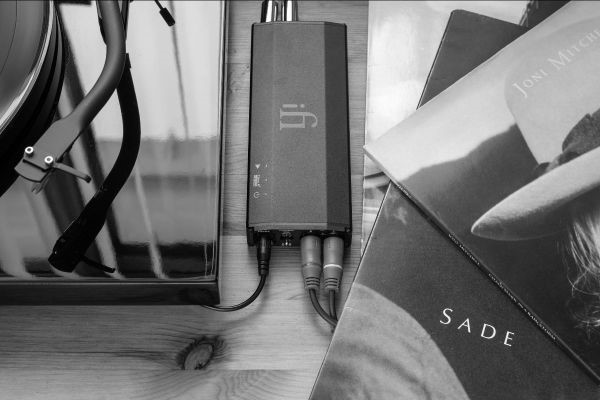 Sonic tailoring to suit you, sir

Many phono stages offer nothing in the way of adjustment to tailor performance to suit a specific system or record, save perhaps switching between MM and MC cartridge types. Some supply settings to match the electrical characteristics of individual cartridges. But very few offer the sheer range of adjustment provided by
the iPhono3 Black Label, enabling a vinyl enthusiast to tailor the performance to precisely match his or her phono cartridge and record collection.

A series of DIP switches on the underside of the unit enable gain and load to be set – essential to wring the very best performance from a high-performance cartridge. Gain can be adjusted between 36dB and 72dB, alongside a wide variety of load values – eight for MC cartridges and a further five for MM cartridges. Spending a little time to set up the ideal combination to match the cartridge on your turntable delivers great sonic reward – iFi has created an online ‘cartridge calculator’ to assist with this.

The iPhono3 Black Label is not only great at pairing perfectly with your cartridge; you can also tailor the sound to match specific records in your collection, thanks to a variety of precisely engineered EQ curves.

Some brief background: in 1954, a few years after the birth of the LP format, the Record Industry Association of America (RIAA) promulgated the use of a specific equalisation curve to standardise the sound and playing time of LP records. While RIAA equalisation was widely adopted in America, different EQ curves were still being applied by record labels in other countries two decades later. By the late 1970s most European labels had adopted RIAA
equalization and by the 1980s it had become the de facto global standard, with just a handful of Asian and Eastern European labels sticking to other EQ curves until the end of the decade.

A toggle switch at one end of the iPhono3 Black Label allows the user to select between three EQ curves: RIAA, Columbia and Decca. It can generally be assumed that LPs produced from 1980 onwards were made using RIAA
equalisation, which means they should sound best with the RIAA setting engaged. But records released before1980 may have been made using different equalisation and may sound better with the Columbia or Decca EQ curve
engaged.

This applies not only to records released by those specific labels. For example, many of Deutsche Grammophon’s classical records released before 1980 can sound dry and flat – this is because they were produced using the Decca EQ curve and very few phono stages provide this option, but with the correct EQ applied they sound superb. As a general rule, if an LP sounds thin and edgy with the RIAA EQ, try the Decca EQ curve; if it sounds overly bright with overblown bass, try the Columbia setting.

But that’s not all! Further DIP switches on the underside allow the RIAA EQ setting to be further tuned to taste. Users can choose the standard RIAA curve – applied with +/- 0.2dB accuracy – or an enhanced version called ‘eRIAA’ offering extended high-frequency response. Alternatively, if the user has problems with warped records, which can cause a large signal output in the subsonic region, the IEC setting takes the standard RIAA
curve and applies a subsonic filter to tackle the issue. Finally, the eRIAA+IEC setting applies the subsonic filter to the enhanced RIAA curve.

A series of DIP switches on the underside of the iPhono3 Black Label enable the user to optimise performance – an exceptional level of control for the true vinyl enthusiast.

Sum of the parts

iFi has utilised components of uncompromising quality throughout the iPhono3 Black Label’s circuit design. For example:

The ideal phono stage for passionate vinylphiles looking to unlock the true sound of their LP collections, the iFi iPhono3 Black