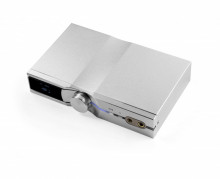 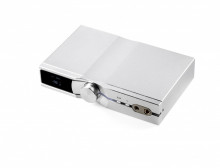 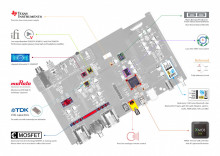 Since its inception in 2012, iFi has been at the forefront of DAC technology for home and portable use, delivering exemplary sound with digital music sources both online and offline. This autumn sees the launch of an all-new mains powered iFi DAC/headphone amp, sporting sophisticated circuits to supply scintillating sonics with every audio format in a home environment.

The NEO iDSD is designed for maximum flexibility, with sleek aluminium casework that can be positioned horizontally or vertically, the latter via a supplied stand. An informative OLED display flips automatically to suit the preferred orientation, while a smooth-acting multifunction rotary control ensures the NEO iDSD is simple to use, despite its sophistication and versatility.

Three operational modes ensure the NEO iDSD covers all bases with aplomb. It can be used as a pure DAC with a fixed-level analogue output to connect to a separate integrated amp or preamp in an audio system. Or, it can operate as a DAC/preamp with a variable output, ideal for connecting directly to a power amp or active speakers. And, of course, headphone users can make use of its excellent amp stage to create a fabulous ‘head-fi’ system.

The NEO iDSD’s ‘digital engine’ is based around a Burr-Brown DAC chipset that iFi uses extensively, selected for its natural-sounding ‘musicality’ and True Native architecture. iFi’s experience with this IC means it knows how to make the most of it; but whilst intrinsic to the resulting sound, the creation of an exemplary DAC stage involves much more than the selection of a particular DAC chip.

One such critical component is the XMOS chip that processes the audio data received via the USB and S/PDIF digital inputs. The NEO iDSD uses a new low-latency XMOS microcontroller with greatly enhanced processing power – compared to the current generation of eight-core chips, this new 16-core IC delivers double the clock speed (2000MIPS) and four times the memory (512KB), as well as the latest SuperSpeed USB standard. iFi’s in-house digital development team has programmed the XMOS firmware to optimise sound quality and ensure a perfect partnership with the Burr-Brown DAC.

Every format at the highest quality

Hi-res audio support is state-of-the-art, handling PCM data to 32-bit/768kHz, all levels of DSD up to DSD512, and single- and double-speed DXD.

Thanks to the Burr-Brown DAC chip’s four-channel True Native design, PCM and DSD take separate pathways – this enables DSD, as well as PCM, to remain ‘bit-perfect’ in its native form right through to analogue conversion. This is often not the case with DAC devices from other brands – even if DSD compatibility is stated, many such DACs convert DSD signals to PCM.

MQA ­– the hi-res streaming codec, as used by Tidal’s ‘Masters’ tier – is also supported through the USB and S/PDIF inputs, with full decoding of MQA files up to 384kHz thanks to the processing power of the new 16-core XMOS chip. This means that the full ‘three unfold’ decoding process is performed internally, as opposed to only the final unfold in the manner of an MQA ‘renderer’.

Globally, MQA has become an important consideration for any comprehensively equipped DAC; for Tidal Masters subscribers, the NEO iDSD is a brilliant way to make the most of the superior sound of which this streaming service is capable.

Bluetooth as you’ve never heard it before

iFi was the first audio brand to deliver products using Qualcomm’s new QCC5100 Bluetooth processing IC when it launched the ZEN Blue and Aurora, combining this chip with proprietary circuits to develop an audibly superior ‘Bluetooth engine’ now also built into the NEO iDSD. While Bluetooth’s convenience and wide device compatibility is well recognised, many people don’t realise how good Bluetooth can sound because they’ve only experienced it at base-level quality using basic and outdated implementations.

All the current high-definition Bluetooth audio formats are supported, including Qualcomm’s aptX Adaptive and aptX HD, Sony’s LDAC and HWA’s LHDC. Other codecs covered include regular aptX and aptX Low Latency, AAC (the favoured format of Apple iOS devices) and SBC (the ‘plain vanilla’ Bluetooth codec). This means that every possible source device is covered at the highest audio resolution its Bluetooth specification allows. iFi’s ‘Bluetooth engine’ can also be updated over-the air, so future codecs may be added to the NEO iDSD’s specification.

The NEO iDSD ‘remembers’ up to seven paired Bluetooth source devices, making it easy to switch from one device to another, with impressive reception range thanks to the latest Bluetooth 5 specification. The DAC stage handles sampling rates well in excess of the maximum delivered by current hi-res Bluetooth formats – of the 24-bit-capable codecs, aptX Adaptive and aptX HD support up to 48kHz, while LDAC and LHDC reach 96kHz.

The digital stage is only half the story in any DAC/headphone amp; when it come to the crucial analogue circuitry, many such devices fall short. Balanced, differential analogue circuit design has long been championed for its ability to reduce noise and cross-talk within the signal path by fully separating the left and right channels. However, this is more complex and costly than single-ended circuitry, and so has traditionally remained the preserve of high-end hi-fi components.

iFi has gradually introduced fully balanced circuit design across its range – first in the flagship Pro Series components, then in the entry-level ZEN Series devices. The NEO iDSD, which sits between the two in terms of price, features a new, balanced, symmetrical dual-mono topology with short, direct signal paths, developed specifically for this model – iFi calls this circuit design ‘PureWave’, referring to the sonic purity it achieves thanks to exceptional linearity and infinitesimally low levels of noise and distortion.

The headphone amp stage maintains an engaging balance between sonic power and poise, no matter what it is tasked to drive – from high-sensitivity in-ear monitors to current-hungry planar headphones – with a continuous power output of more than 1000mW into 32ohms available through the balanced headphone socket. To retain maximum resolution, volume is adjusted in the analogue domain via a resistor ladder, under precise microprocessor control.

The OLED display, which indicates audio format, sampling rate, volume level and input mode, offers user-adjustable brightness and SilentLine design, ensuring there is no electrical noise to interfere with the audio signal. Even the way the NEO iDSD switches between settings has been engineered to ensure sonic transparency – FET-based switching is handled by a microcontroller, which only ‘wakes up’ when the user changes a setting, thus eradicating any sonically deleterious interference.

In terms of measured performance, all this painstaking attention to detail results in THD (Total Harmonic Distortion) of <0.0015 per cent and SNR (Signal-to-Noise Ratio) of >120dB – highly impressive at any price. To the ear, this translates as more clarity and texture, and a more dynamic and engaging performance – quite simply, you hear more of the music, just as the artist intended.

For cable connections, the NEO iDSD provides three digital inputs – asynchronous USB Type B, as well as both optical and coaxial flavours of S/PDIF. Three devices may be connected simultaneously via these inputs, plus a fourth via Bluetooth, with the desired input selected via the front-mounted rotary control.

Balanced outputs are supplied, to make the most of the NEO iDSD’s fully balanced circuitry. To the front, alongside a standard 6.3mm single-ended headphone socket, resides a 4.4mm Pentaconn output for headphones offering balanced connection. An increasing number of high-quality headphones and in-ear monitors either come so equipped or give the option of detaching the cable and upgrading to a 4.4mm Pentaconn connector (this output is particularly recommended for tougher headphone loads). Around the back, to connect the NEO iDSD to an amp and speakers (or active speakers), single-ended RCA outputs are accompanied by a pair of XLR sockets ­– the standard balanced connector for high-end hi-fi. 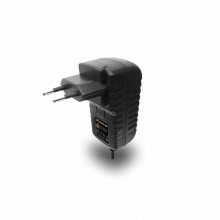 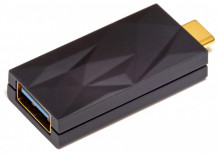 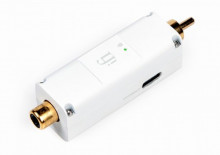